Admittedly, I am sputtering to the finish line for 2013.  What a strange, transitional twelve months it’s been.  Trying to figure out the work/life/Deliberate-Productions-work balance has proven challenging lately, and I feel like I’m floundering on all fronts.  (Yeah, that explains the sporadic blog posts in the latter part of the year.)  But the power to change things starts with moi, so I’m ready to tackle 2014 with more focus and commitment.  It’s time to re-calibrate.  Isn’t that what New Year’s resolutions are all about?

Some of my goals in the next coming year include the usuals – reading more, writing more, and flossing more.  I need to stay more frequent with my blog posts, e-mail correspondence, and general friendship maintenance.  I want to send more handwritten letters and cards to people.

I will try to eat less, drink less, and spend less.  In fact, I’m kicking off January with a cleanse of sorts – no booze until my birthday in February.  I shall miss my vino and winter whiskey, but after much holiday indulgence I’m sure my liver will be grateful for the break.

I need to create something tangible this year.  I was hoping to produce a short film at the end of 2013, but that veered off-course thanks to another project that demanded my extracurricular attention.  So going into 2014, I am determined to produce some sort of piece that requires a camera, a director, some actors, and an exceptional sound guy or gal.

To this end, I find inspiration from my writer-director friend Jason Headley.  I met Jason at the CineStory retreat in September 2012 and was struck by his intelligence, sensitivity, and talent.  After the retreat, we stayed in touch over e-mail and I remember asking him at the end of 2012 what writing contests he planned on entering in 2013.  He responded that he wasn’t going to enter any; rather, he would “just go make a film.”  As Jason so insightfully put it:  It feels funny to try to get other people to give me approval to do a thing I can do without their approval.

Later in the year, Jason made this short: It’s Not About The Nail.  The video went viral. It’s featured on Will Ferrell’s “Funny or Die” website. It has been seen by over 7 million people on You Tube.  It’s a Staff Pick on Vimeo.  Earlier this month, it garnered Jason the following tweet from Michael Eisner: “@jason_headley will be a big director.”  Great, well-deserved things are now happening for Jason Headley.

Because he didn’t look for approval to do something he could already do.

It’s time for me to take “doing” to the next level.

Here’s wishing you all a happy, healthy, dream-come-true-making New Year! 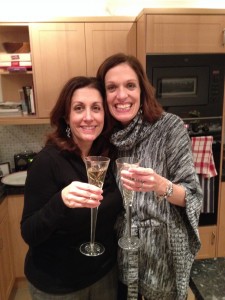 Cheers from DLB and VP Babs!

2 Responses to The Next Level