Now that Deliberate Productions is an official company (or so says the state of California), I need to figure out the identity of this production company.  Sure the plan is to create heartbreaking works of staggering genius, but how do I encapsulate that in a fun and cheeky logo?  That’s why a guy like Shawn Hazen is essential.

I dipped into that big ol’ jar of personal connections (we all own one!) and through my cousin, Craig, I came to know one of his old chums and fellow super-talents, Shawn.   Deliberate’s Marketing Veep Barbara also deserves major credit for bringing Shawn into my world because she’s enlisted his design services on behalf of the company that actually pays her a check for her hard work while I’m currently compensating her in promised future martinis.

"Thanks for all the hard work, Babs!"

Shawn Hazen is a Chicago-based graphic designer and he’s going to give this here website an overhaul in the upcoming weeks. (Thanks for setting up this temporary bloggy, though, Shawn!)  Yes, soon Deliberate Productions will have an identity – its own cool Hazen-created logo that will be emblazoned across stationary, business cards, coffee mugs, baseball caps, glow sticks, Snuggies – pretty much any semi-tasteful item that I can brazenly market. (Can you guess what gifties friends and loved ones will be receiving from me come holiday time?)

I think the design below is a good example of why I was determined to work with Shawn. (I apologize in advance for those easily offended…)

Shawn and I are also talking about creating a poster for Beneath the Surface.  Well, I do lots of talking and Shawn does all the creating.  This has me really excited, though!  The whole point of joining the social networking revolution is to raise awareness early, but it helps to have actual images with which to raise awareness, right?

I looked through a great coffee table-type book, A Century of Movie Posters (thanks again for the loaner, Kev), and gave Shawn my thoughts on why certain film posters resonate with me.  As luck would have it, Shawn and I experienced a true melding of the creative minds.  Our general conclusion: Saul Bass is a graphic designing God. 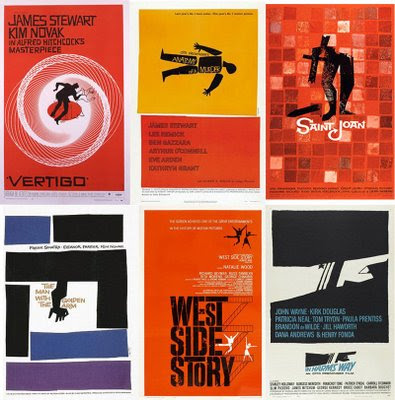 The strength and simplicity of Bass’s designs are what appeal to me.  I appreciate that whatever central image he chooses has strong thematic ties to the film.  Yet it’s just graphic enough that the viewer has to give it a little extra thought and consideration.  The book sums it up better than I can: “When developing identities for films, in each case Bass attempted to find a strong graphic symbol that would act as a summary of the plot.  He maintained the modernist belief that it is possible to strip away layers of complexity and arrive at a single visual essence.”

Of course, hypothetically speaking, once a film distributor gets ahold of Beneath the Surface (and, subsequently, the marketing of the film) and assuming I’ve been fortunate enough to attract any “name” talent in the lead roles, you can bet the distributor will have those recognizable faces plastered all over their version of the poster.

Have we forgotten anyone?

But, in the meantime, Shawn can design some iconic imagery early on and perhaps create what will one day be the exclusive collector’s edition of the Beneath the Surface film poster.

I encourage you to look over Shawn’s work (linked for your convenience on this very blog under “Cool Graphic Stuff”) and you’ll understand why I’m all the more energized to see what cleverness he creates for Deliberate in the upcoming weeks.  Go, Shawn, Go!

NEXT UP: I’m not doing a very good job of predicting my future blog posts – seems I’m pulling the unintended bait ‘n’ switch more often than not.  So let’s just keep the future open for now…