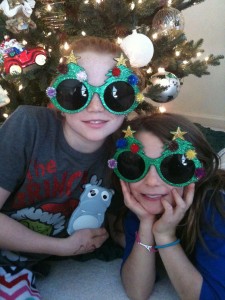 On the heels of the holidays comes another anticipated season: OSCAR SEASON!  Yes, the time when all of Hollywood is whipped into a frenzy over potential golden statuettes being handed out to worthy and not-so-worthy recipients.  The nominations are announced this Thursday and, as always, I’ve been trying to get a head start on seeing what I think will receive Academy love this year.  It certainly helps when you live in LA where screeners are passed around like leftover Christmas candy.  I’ve seen some great movies so far – ARGO, ZERO DARK THIRTY, and LIFE OF PI come to mind – but I haven’t found my version of THE ARTIST yet.  Perhaps relishing in that kind of head-over-heels cinematic love is as rare and elusive as finding Mr. Deirdre?

As I lay out my writing goals for 2013 they include finishing up some revisions on old scripts and firing up the creative cylinders over new projects.  One idea, in particular, came to me during my time in London and I’m very excited to get started on it.  I plan to outline more thoroughly than I normally do in the hopes that the script writing will go faster.  We’ll see.  But before I go too off-track, there is a correlation between the Oscar contenders I’ve been seeing lately and my anticipation over new screenwriting projects.  As my friends and family can painfully attest, I watch these films with a highly critical eye – but with the hopes of learning what works and what might fall short in the storytelling department.  And the element I keep coming back to is CHARACTER and audience investment in that character.  Whoever our protagonist is, we must stay engaged with them.  I don’t care if a protagonist is a flawed, not-always-likable human being – in fact, that’s usually far more interesting to me.  But the writer has to give us someone to latch onto in some sort of emotional way.

I bring this up because I just watched ZERO DARK THIRTY.  It’s the best-made film I’ve seen yet.  Kathryn Bigelow is an incredible, ambitious director – I’ve enjoyed her work for a long time. (I still think POINT BREAK features the best foot chase ever featured in a film.)  The scope and density of ZERO DARK THIRTY and its story of Osama Bin Laden’s capture is complex, staggering, and masterful.  And I know that screenwriter Mark Boal (a journalist familiar with being embedded with U.S. troops) wanted very much to recount the story as accurately as possible.  But I fear he sacrificed a fully-engaging, three-dimensional lead character in the process.  There was so little backstory or insight given about Jessica Chastain’s CIA operative, Maya.  And any potentially meaningful relationships she appeared to have were fleeting and quickly jettisoned for the breakneck pace of the plot and moving it forward.  I never understood what was driving this secret agent to the point of laser-like obsession.  So at the end of the film when (SPOILER ALERT) the mission was accomplished, it felt like a hollow victory.  I was unattached to this woman, so I didn’t really care.

It got me thinking about the great Lindsay Doran panel I attended at last October’s Austin Film Festival where she talked about “The Psychology of Storytelling” and what makes a film-watching experience more engaging for an audience.  The panel was an extension of a useful article Doran wrote for The New York Times, “Perfectly Happy, Even Without Happy Endings”.  Here’s a link – I encourage you writerly and film-loverly types to check it out: http://www.nytimes.com/2012/01/15/movies/lindsay-doran-examines-what-makes-films-satisfying.html?pagewanted=all&_r=0.  Doran posits, “People don’t care about accomplishments; they care about the character celebrating the accomplishment with someone they love.  Positive relationships trump positive accomplishments.”  I couldn’t agree more.

Chastain’s character in ZDT left me cold because she had no one to celebrate her accomplishment with – and even if that was the point of her single-minded character (victory at all costs), we still needed to understand why she was that way.  I liken ZERO DARK THIRTY to the 2007 Paul Thomas Anderson film THERE WILL BE BLOOD, which I also admired very much.  Powerful filmmaking.  A technical triumph.  Intellectually stimulating.  But lacking heart and soul.

As far as my own preferences and sensibilities go, I will continue trying to inject heart and soul into my characters and my writing.