The Kids Are All Right and 576 People Are All Wrong

At the Filmmaker Forum last weekend, I sat in on two panels that featured independent film producer Celine Rattray.  Her credits include a number of small movies I’ve heard of but have never seen (Lonesome Jim, Grace is Gone, New York, I Love You) and one big-small film that I’ve heard of and am very eager to see: The Kids Are All Right.  I’m guessing a lot of you have seen the film – it’s been one of the year’s best-reviewed movies and provided a headier alternative to the usual summer blockbuster fare.  The one-sentence logline to describe the plot (courtesy of movies.com): The son of a same-sex couple seeks out the sperm donor who made his birth possible.  Or as Dave White tags it in his own movies.com review: Moms Interrupted. 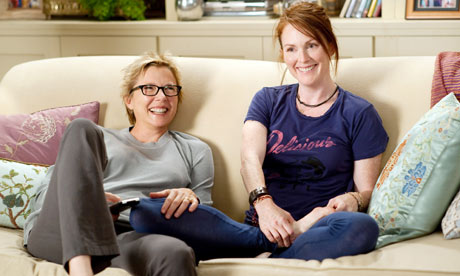 How about Mark Ruffalo instead of David Crosby?

According to producer Rattray, you would think the film had everything going for it when she initially started shopping it to studios and potential investors looking for a low-budget project.  1) Proven art house writer-director Lisa Cholodenko (High Art, Laurel Canyon) was at the helm; 2) Well-respected actresses Annette Bening and Julianne Moore were attached; 3) The material, while provocative in its exploration of “non-traditional” families, was timely and relevant; 4) It was packaged as a comedy – always a good selling point.

Over 500 executives/investors/Hollywood-types passed on the film.  PASSED.  I believe the final number was 576.  Rattray made a note of it.

In the end she found thirteen investors to pool together $4.3M to make the movie.  She was also fortunate enough to line up a distributor, Overture Films, as the film went into production.  Then halfway through shooting, that partnership fell through.  Rattray was devastated.  Her investors were nervous.  Like most indie films, Rattray’s hope was now with film festivals and positive word-of-mouth.

Victory #1: The Kids Are All Right was accepted into Sundance.

Yes, it's another shameless Sundance plug!

Rattray had screened films at the festival before.  But this was the first screening she attended for one of her films where the distributors sat through the Q&A afterwards rather than rush off to another screening.  Within hours, Rattray found the film the object of a bidding war between seven prominent distribution companies including Summit, Focus Features, and The Weinstein Company. And when it came time to make a final decision about which company to go with, it was no longer about the money – it was about which distributor would best serve the film.

Focus Features won out because it was clear to Rattray that they had genuine passion for the movie and were well-calibrated to position it, having found success with their campaigns for Brokeback Mountain and Milk.  Focus bought the distribution rights for $7M.  So before the film had even experienced a proper theatrical release it had already more than earned back the initial investment put into it.  All in the course of one night.

Let's get this party started!

Now I’m not going to kid myself that these scenarios are common.  While it’s exciting to hear about the Little Miss Sunshines and Slumdog Millionaires and all of those other little-films-that-could, I know that they are the exception not the rule.  But those are the stories I will cling to when a well-tailored agent from one of the top agencies in town politely tells me that “drama” is a dirty word while surreptitiously glancing at her strategically placed Blackberry during our ten-minute meeting.

Yeah, Lady…were you among the 576 to pass on The Kids Are All Right, too?

NEXT UP: It’s a mystery wrapped in an enigma enveloped in foggy blogginess.