“Trees that are slow to grow bear the best fruit.”

For those of you who follow this blog on a semi-regular basis, you may be wondering “What the heck’s going on with BENEATH THE SURFACE these days?  Isn’t that the whole reason DLB started this silly blog in the first place?”  Yes, chronicling the path to producing my first feature film is the whole reason I started this silly blog in the first place.  But, as it turns out, raising money to finance a film can take a while.  A loooooooooooong while.  As I’ve heard from countless indie moviemakers at various film panels, achieving success in the moving picture business is a marathon…not a sprint.  At this rate, I think I’m just passing the five-mile mark.

Granted, I’ve been a little less focused on my fundraising efforts over the past few months for a variety of reasons: travel, holidays, SONS OF ANARCHY viewing, Oscar-nominated film consumption, etc.  I’ve also been preoccupied with some rumblings happening regarding one of my other scripts.  I haven’t said too much about it because I don’t want to jinx things, but the whole point of this blog is to share the ups and downs of my experience in this new chapter of my life.  And I don’t want my bloggy readers to worry that no progress is happening for DLB.  So allow me to give you the admittedly-vague broadstrokes of recent developments.

There is a film producer out in the universe who is interested in one of my projects.  In fact, it’s the producer I mentioned back in my blog post of 10.8.10 – he’s a very cool guy and he has been a champion of my work for over two years now.  He’s currently seeking co-financing to produce one of my screenplays and he’s expressed confidence that a greenlight will happen.  It’s the closest I’ve come to actually having something produced and Mr. Producer is dealing with well-known talent and meeting with award-winning production companies.  Yes, it’s heady and hopeful and exciting.

But I’m also realizing that even when you’re working with established, profitable players you’re still building a house of cards and must exercise loads of patience.  Actors can take months to read a script.  Meetings with financiers get scheduled, postponed, and rescheduled.  All I can do is sit on the sidelines and wait.  And the hard reality is that after all of Mr. Producer’s efforts, the house of cards may come tumbling down.  Talent could drop out.  Co-financiers could pass on the film’s prospects.  But it’s nice to have someone in my corner working hard on my behalf.  A script sale would have a huge impact on my career and my efforts in getting BENEATH THE SURFACE off the ground, too.  Oh yeah, my anemic bank account wouldn’t mind a cash influx either.

(In addition to Molière, let’s recognize Tom Petty’s wisdom: The waiting is the hardest part.)

In the meantime, I am thrilled and proud to unveil the official poster for BENEATH THE SURFACE, designed by the amazin’ Shawn Hazen.  Shawn presented me and VP Babs with a couple of options and after much back-and-forth involving design alterations and color adjustments, this one seemed the perfect representation of the film as I see (and feel) it.  I love how symbolic, striking, and simple the poster is.  I think even Saul Bass would be impressed. 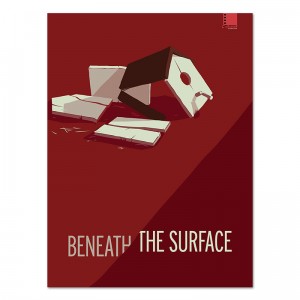 You can see more of Shawn’s beautiful work at his website: http://hazencreative.com/

This entry was posted in Beneath the Surface. Bookmark the permalink.