The 52-page SONS OF ANARCHY spec script I had crafted and struggled over in a two-week frenzy was now on the brink of obliteration, all due to an FX website feature known as an appisode.  (The recap: SPECulations – Part Two: THE BIG STABBING INCIDENT.)

I put out an S.O.S. e-mail to some trusted writer friends who were also working against the June 1st deadline for contest submissions.  I fired off the following questions: Could I ignore the appisode since it wasn’t on the air?  If I did that would it look like I hadn’t done my proper research?  Was it too early to have a drink? 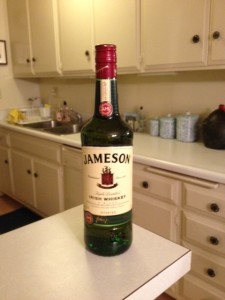 Lucky for me, my fellow scribes  talked me off of the ledge.  The general consensus was to keep calm and carry on.  My writer pal MT was the first to jump in with advice: Ignore it.  I bet most reading it won’t know that.  And I think that’s beyond the scope of proper research. He was also kind enough to point out:  And the official start time for a drink on Memorial Day is 10 a.m., so sorry, you have to wait 4 more minutes.  JC chimed in: I totally agree with MT. Those Appisodes don’t count really. They’re more of a ploy to upsell the “interactive” experience to advertisers in my opinion. It’s so hip nowadays like THE TWITTER! Or THE FACEBOOK thingy.  My friend Charlie (the one who got me into this mess in the first place) echoed the earlier sentiments: I think your time is best spent making what you have better as opposed to a major reworking of the plot.

I decided that they were right.  It was too late to shift gears, and I’d rather focus my efforts on plussing the pages before me.  If the person reading my script was a die-hard SOA fan who knew every episode and appisode by heart, then hopefully they’d view my spec as a re-envisioning, if you will, of the BIG STABBING INCIDENT. (At least that’s what I’ll tell myself when the moments of doubt creep in.)

And so I continued on.

Rather than try to reassemble my head space during the revision process, I figure I can just share some excerpts of my Facebook observations/rants to these aforementioned writer friends as I dove into the rewrite: 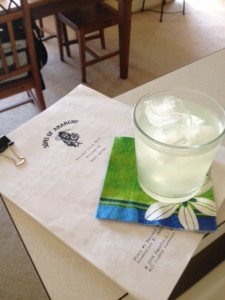 Yes, on June 1st I mailed in my application form to the Warner Brothers Writers’ Workshop and uploaded my now 59-page spec to the WB website and the Austin Film Festival Teleplay Competition.  Before I submitted it, my trusted readers had weighed in with lots of positive feedback (whew!) as well as some valuable thoughts and questions.  They also served as a final line of proof-reading defense for which I am eternally grateful given my beyond-fatigued condition by that point.

While I wouldn’t recommend writing a script in that kind of time crunch, I realize that the exercise was probably a good representation of what most TV writers experience: brutal deadlines, late nights, and frequent lapses into despair.  Of course, TV writers do it as their day job (rather than fit it in during the precious hours after said day job) and, oh yeah, they get paid to do it.  But still, I learned a lot about staying focused and decisive as I Final Drafted my way to THE END.

I also appreciate that writing a spec means much of the heavy lifting is done for you.  A show as good as SOA possesses well-defined characters and a clear voice and structure – my job as a spec writer was simply to play with all of those wonderful, dynamic attributes – hopefully, in an inventive, surprising way.

And while I would LOVE to advance in either contest, I’m grateful I managed to finally complete my very first spec script.  (Thanks for getting me into that mess, Charlie!)