When last we left, I had just about finished the first draft of my SONS OF ANARCHY spec (SPECulations – Part One).  Sure there was still plenty to tackle going into my final week of writing, but at least I was close to completion.  With my trusty red pen, I scribbled notes on practically every page to indicate where transitions needed finessing and dialogue needed doctoring.  My extracurricular writing sessions every night of the previous week were catching up with me – I was bleary-eyed, exhausted, and, subsequently, the work ahead felt more daunting.  But I was in the home stretch – only one week to go – and I had to suck it up and get ‘er done, right?  I set to work on the revisions.

(Remember the “DISASTER” I mentioned in my last post in a pathetic attempt to cap it off in an unnecessarily dramatic way?)

As I dove into more research via the insanely thorough wikipage devoted to all things SAMCRO (“Sons of Anarchy Motorcycle Club Redwood Original” for those of you wondering), I noticed a tab on the website between those for Seasons Three and Four called “Appisodes”.  Appisodes?  What the hell is an appisode?  I clicked to investigate.

SIDE NOTE: Now let’s not forget that my entire spec episode revolves around the BIG STABBING INCIDENT that’s eluded to in the first episode of Season Four.  It’s the stabbing incident we never see, but only hear about.  Remember the words of my previous post that would come back to haunt me?  Since the assault essentially happened off-screen, wouldn’t it be interesting to see how it played out?  Well, I wasn’t the only one who felt that way. This won’t be good, DLB.

Back to those appisodes…

As it turns out, Kurt Sutter and FX also thought SOA fans would like to know what happened to our favorite outlaws during that 14-month stretch between Seasons Three and Four.  (Again, the 14-month stretch within which I set my spec episode.)  So they produced four shorts (each 2-4 minutes long) that were shown on the FX website between seasons.  New content.  Appisodes.

NEW SOA material that I’d never seen before?  Count me in!  I was excited as I began to watch each of these appisodes.

And there it was.  An appisode entitled “Payphone”.  An appisode that may as well have been called “The Big Stabbing Incident”.  It was two minutes of seeing exactly how a significant character was stabbed.  It was basically the condensed version of my 52-page spec script.

Could I ignore the appisode since it wasn’t on televised airwaves?  If I did that would it look like I hadn’t done my proper research?  Did I have the time and mental fortitude to shift gears and alter my story?  Was it too early to have a drink?

At this point, I was ready for SAMCRO to just throttle their Harley Davidsons over me.

With less than a week to go to finish my spec, what was I gonna do?

(Oh yeah, I’m gonna milk this entry for all it’s worth.) 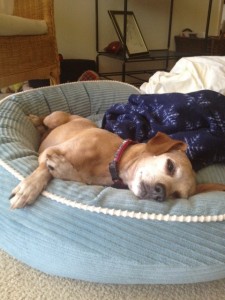 I know, Luce-Goose. I’m exhausted, too!

One Response to SPECulations – Part Two: THE BIG STABBING INCIDENT