In my lone blog post of May, I gave a broadstroke recap of my experience writing a SONS OF ANARCHY spec script.  Remember?  I also proffered to go into more detail about that period of enlightenment at a later date.  Well, bloggy readers, that day has come! (I know, I know…try to contain your excitement.)

Recounting the writing of my SONS OF ANARCHY spec script is going to be a bit of a blur because the writing of it was a bit of a blur.  Yet, I figure it’s worth doing for posterity since it was my very…first…spec.  It was May 9th when I decided I was going to attempt to write an episode of SONS OF ANARCHY to submit to the Warner Brothers Writers’ Workshop and the Austin Film Festival Teleplay Competition.  (I blame my writer friend, Charlie, for prodding me over the edge.)  And, of course, the deadlines for both contests fell on June 1st.  Yes, I had three weeks to pull this thing together. <GULP!>

With the switch officially flicked, I went right into outline mode.  The first thing I had to consider was at what point in the five-season series would I set my episode?  I think most schools of spec-writing thought would encourage you to stay as current as possible with storylines and characters, but I took my chances and settled on a time period between Season Three and Season Four.  There’s a 14-month time passage between those two seasons and in the first episode of Season Four you learn that a character was stabbed at some point during those 14 months. (For those of you worried I just spewed out a spoiler, the character is alive and well at the beginning of Season Four – the knife attack simply plays into events that kick off the season.)  I figured a stabbing is a dramatic, high-stakes event and the purpose of a spec is to show off your dynamic writing chops, right?  Since the assault essentially happened off-screen, wouldn’t it be interesting to see how it played out? (Words that would come back to haunt me…)

I rewatched the episodes at the end of Season Three and beginning of Season Four to reacquaint myself with the storyline at that point.  I jotted down plot notes and lines of dialogue that would help me frame each various character’s state of mind.  I also read Kurt Sutter’s pilot script (thanks, ERW, for sending it to me!) to really get my head into the SOA zone.  Obviously, that exercise was invaluable.  Sutter’s writing is so strong and provocative – maybe it’s all of the f-bombs he drops into his descriptions? – and I was reminded of why I fell in love with the show in the first place.  It also gave me a sense of the show’s script format (there really isn’t one – or if FX has one, then Sutter doesn’t seem to care about it) and overall pacing.  As I started listing the major beats of the story I wanted to tell, my spec began to take shape.   I finished my outlining on Saturday, May 18th, and was ready to start writing the script.

I expanded the beats into “index cards” via Final Draft.  I’ve used Final Draft for over a decade and had no clue about this feature until recently. (Thanks for calling it to my attention, TT!)  I won’t bore the non-writers with a description of how it works, but suffice it to say, it’s a useful outlining tool that also helps jumpstart the script itself.  My goal was to finish the first draft by Friday, May 24th, and then send it off to a few trusted readers.  That esteemed consortium included some fellow SOA fans and VP Babs, who has never seen SONS OF ANARCHY.  I figured the fan-readers would keep me honest about whether or not I was capturing the voice of the show, while VP Babs could tell me if everything was tracking and making sense and, hopefully, still entertaining to an unAnarchy-ed individual.

The week of writing entailed late nights of Jameson on ice, classic rock music, and a slowly growing page count.  I found a great resource in the form of a SONS OF ANARCHY wiki page (surely maintained by the most insanely devoted of fans) that offered me specific details and story points when I couldn’t remember them (SAMCROpedia).  I adhered to several “no internet surfing” writing sprints – usually 45-minute stretches of focused Final Draft time.  Turns out, I can get a lot of writing when I don’t fart around on LaineyGossip.com. (Do love that website, though!  Guilty Pleasure.)

I did not have the first draft done by the 24th, but I hit page 50 on May 25th, which was pretty close to completion. (Sutter’s pilot script was 52 pages, so I used that as my yardstick.)  As I read over what I’d written, I could see the holes still to be filled and some clunky or non-existent-but-much-needed transitions.  Of course, there was terrible, cringe-worthy dialogue that I’d need to finesse.  But, overall, I felt like I was closing in .

(How’s that for a hyperbolic, cliff-hanger-y statement?!?) 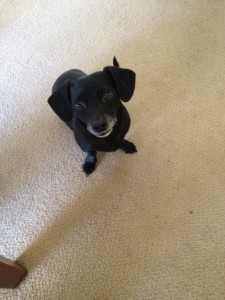 6 Responses to SPECulations – Part One