The 2013 Austin Film Festival and Conference has come and gone, and for me it was the best one yet.  A large part of that was due to the presence of honoree Vince Gilligan.  Just about every panel featuring him (including a screening of THE FRENCH CONNECTION, which he presented) was packed to full capacity as those of us in attendance tried to glean whatever wisdom we could from the man responsible for creating one of the greatest television series ever. (BREAKING BAD, for those of you who may have been living on Mars for the past five years.) 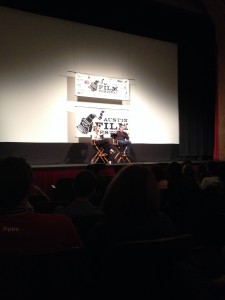 There’s a lot of ground to cover regarding AFF, so I’m going to make this post another two-parter.  And for my bloggy readers desperate to know how HUNGRY LIKE THE WOLF fared in Lindsay’s Doran’s panel “The First Ten Pages”…well…I’m getting the painful news out of the way first.

So let’s talk about DLB taking it on the chin at “The First Ten Pages” panel!

Once again, about thirty of us crammed into a small room at the Driskill Hotel to learn about the art of making a strong first impression.  The five of us with pages being reviewed were asked to sit toward the front – perhaps so we could stare into the eyes of our executioner?  My writer friends Jon and Heather were there to provide moral support…and post-panel drinks at the bar afterward.

Lindsay was stationed at a high table at the front of the room and her iPad was connected to a large screen on which were listed the TEN COMMON MISTAKES she encounters when she reads scripts.  They are as follows:

3) Not Actually a Comedy (DLB Note: The scripts selected for this panel were randomly pulled from the top 10% of comedy entries)

5) Too Many Characters (i.e. Who is the protagonist?)

9) Comedy Based in a Superficial World

Script by script, Lindsay offered her impressions and feedback.  She always started with what she liked about the script (which took about two seconds) and then launched into the problems that arose for her during the read as they related to her list of common mistakes.  My script was third on the chopping block and the things she liked about it were the title and one of the supporting characters.

Yep.  The title. And one supporting character. 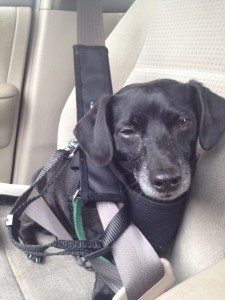 I feel your pain, DLB.

As for the sins I committed from the list, they included #2, #3, #6, and #8.  Ouch.  The one that really hurt was that my exposition was transparent (#8).  If there’s one thing I resent in films, it’s when information is communicated to an audience in a way that underestimates their intelligence.  I try hard to relay necessary info in as subtle a way as possible (without being too obtuse), so it was personally frustrating to learn that I didn’t achieve this in Lindsay’s eyes.  But her challenge to me was to find a more “elegant” way to introduce exposition.  It’s a challenge I’m determined  to meet in my next draft.

One of the other criticisms I received was that I was offering up obstacles without stakes – I need to show a more emotional attachment between my lead character, Wendy, and what she’s struggling against.  Lindsay pointed out specific places where I could heighten the stakes for Wendy in a way that would more effectively engage the audience.  Her advice was spot on.

I’m happy to report that during the panel I took my medicine dutifully and did not run from the room screaming.  While I joke about post-panel drinks, I actually didn’t come away from the experience feeling massively insecure about my writing ability.  Rather, a gut-check tells me I’m on the right track with the pages I presented and now I’ve got my marching orders to help me bring HUNGRY LIKE THE WOLF to the next level.  Progress. 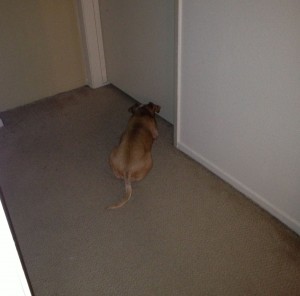 I guess that wasn’t so bad…

I do have to share a funny moment that happened toward the end of the panel.  When Lindsay was about to start analyzing the final script, she looked at the writer of it and noted that he seemed nervous.  Without missing a beat, the writer replied, “Well, that’s ‘cuz you’ve been shittin’ on everyone’s scripts.”  A welcome moment of levity that caused the room to burst out laughing.  Lindsay took it in stride.

And in case you’re wondering, The Three Most Terrifying Words in the History of the American Screenplay were found in the opening lines of the aforementioned final script: “LAYLA, 47, Somalian.”  This, too, drew a laugh because Lindsay’s point was that most Hollywood studios aren’t looking to make movies about non-white women over 25.  Sad but true.  She didn’t say it was impossible, but in this particular case she suggested that the writer find another way to ease the reader into such an unconventional story.

The benefit of a panel like “The First Ten Pages” with a professional like Lindsay Doran is that it pushes you to BE BETTER.  As a producer, she wants nothing more than to find that next great script that grabs her attention and electrifies her enough to shepherd it through production.  How generous of her to give her time and professional experience to those of us eager to deliver the goods.  “The First Ten Pages” remains one of the most practical and beneficial panels offered at the Austin Film Festival and I hope I can attend it again next year. (Although I’m happy to relinquish my place on the chopping block!)

This entry was posted in Film Festivals, Hungry Like the Wolf, Writing. Bookmark the permalink.

3 Responses to The Torturous Ten Pages