Despite the smackdown my first ten pages took at the hands and intellect of Lindsay Doran, I still came away from the Austin Film Festival feeling inspired and motivated.  The conference has so much to offer, and there were a number of panels I wish I could have checked out, but there simply wasn’t enough time.  When you’re presented with simultaneous choices like Vince Gilligan, Callie Khouri, and Jonathan Demme, what are you supposed to do?!? (Me, well, I chose Vince Gilligan.  But he and I share a birthday so I figure that means we’re kindred writing spirits, right?)

The panels I did attend were all really satisfying and informative.  Some were about the mechanics of writing while others were more anecdotal observations about working in the entertainment industry.  But all involved successful people whom I admire.  Listed below are their bits of wisdom that resonated with me.

JIM TAYLOR (co-writer of SIDEWAYS and ABOUT SCHMIDT)

Taylor has co-written the aforementioned films with director Alexander Payne.  He talked a lot about writing with a partner and emphasized that it’s important to set-up the ground rules of the partnership.

One rule he and Payne adhere to when working on a script is that they always work together in the same room rather than divide up the work and go their separate ways.  Taylor explained that while writing together can be more time-consuming and painstaking, he finds that it forces the partners to come to a true consensus over the material rather than get too attached to their own separate work.

RIAN JOHNSON (writer/director of BRICK, THE BROTHERS BLOOM, and LOOPER)

Johnson presented a “Script-to-Screen” analysis of his first independent feature BRICK.  He was heavily influenced by crime writer Dashiell Hammett in making a modern-day noir movie set in a high school.  The moody, Sundance-winning film follows Joseph Gordon-Levitt as Brendan Frye, a lonely teenager determined to find his missing ex-girlfriend.  Johnson talked a lot about the character of Brendan and the focused mission Brendan was on throughout the course of the film.  As writers, we’re told that the protagonist should always be active and should drive the story.  Johnson stressed the importance of his main character setting his sights on a goal and always pushing toward it,  despite the often unsettling information he received.  Even when Brendan suffers at the hands of others, he takes his punishment and continues onward. (Funny – that’s a lot like my “First Ten Pages” panel.  Or writing in general! ) 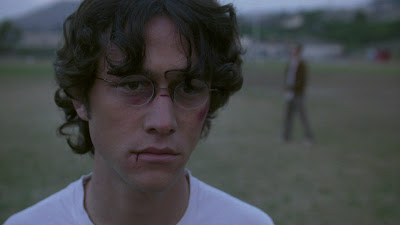 Man on a Mission

Like Rian Johnson, Black shared a script-to-screen analysis of his film KISS KISS BANG BANG.  The script began as his attempt to write a romantic comedy.  He even consulted with the legendary James L. Brooks. Diving into the first draft was a struggle, and he ultimately had the epiphany that he was not Brooks. He realized, “I was trying to fly before I could walk.”

I think that last piece of advice sums up the ultimate mandate for good writing: Create and sustain interest.

Time to get to work!

This entry was posted in Austin Film Festival & Conference, Writing. Bookmark the permalink.