I’m clearly off to a rocky start with my 2014 resolutions.  While I have been reading more and, in fact, finished a great novel recently – Lookaway, Lookaway by Wilton Barnhardt (thanks for the recommendation, KS!) – my extracurricular writing (including the regular upkeep of this here blog) has fallen to the wayside.  Yes, when I arrive home at the end of a long work day, even mustering up the energy to answer personal e-mails can seem like an insurmountable challenge.  We’re only three-and-a-half weeks into 2014, though – I’ll find my way.  I have been thinking about the scripts I want to finish and start this year, so that counts for something, right?  Long days aside, the only way I’m going to do it is to just DO IT, though.

One edict I am managing to keep is my goal to see all of the Oscar Best Picture nominees on the big screen this year.  Okay, okay, I realize to many of you this is hardly a lofty ambition (and it’s not), but here in La-La land during awards season there are DVD “screeners” readily available so you can watch all of the nominees from the comfort of your Crate & Barrel sofa, cuddled next to your pets with a glass of wine in hand.  In the past, I’ve seen a number of the nominated films this way, thanks to the generosity of friends and colleagues (who shall not be named because the stern Academy rules make it seem like a person could lose a limb for sharing a screener).  However, last year I saw ZERO DARK THIRTY first as a screener and then in the theatre, and seeing it on the big screen made me appreciate all the more the scope and ambition of Kathryn Bigelow’s film.  I couldn’t escape via the “pause” button on my remote – in the theatre, I was staying on Bigelow’s intense, harrowing ride.

But *I* wasn’t there for snuggling!

Big Screen vs. Small Screen also brings to mind a similar experience with a favorite film of mine: WEST SIDE STORY.  I love the musical and I love the film.  I had only ever experienced the movie on the small screen, though, since it came out in 1961 (long before DLB was even a possibility).  Then a couple of years ago, the state-of-the-art LA movie theatre the ArcLight offered a screening of WEST SIDE STORY in all of its 70mm glory.  I had to see it!  It was such a treat to witness those terrific Jerome Robbins dance sequences on a huge screen and to enjoy the amazing Bernstein & Sondheim songs in Dolby surround sound.  But what was particularly transformative for me was Richard Beymer’s performance as Tony.

Granted, Tony is not as flashy a role as the other male characters in WEST SIDE STORY, like Riff and Bernardo, but seeing Beymer on the small screen always left me feeling like he was the weak link in the cast, a bit milquetoast.  But all of that changed when I saw the film in at the ArcLight.  Seeing Beymer’s face fill an entire screen opened up an expressiveness and vulnerability in his performance that I had never noticed before.  His Tony felt more heartbreakingly accessible than ever.  He was no longer dwarfed by his counterparts.

Yeah, even though Lucy & Sophia can’t come to the movie theatre with me, I think bigger will be better – or more illuminating – when I’m assessing the Best Picture nominees this year. 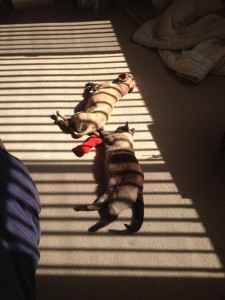 No worries, DLB. We’ve got some serious napping to do.

This entry was posted in OSCARS. Bookmark the permalink.