Another Round of Sun Dancing

Subjectivity has finally worked in my favor for I recently received the following news: “We are pleased to inform you that your script BENEATH THE SURFACE has been selected for the second round of consideration for the 2013 January Screenwriters Lab!”  Why is this particularly exciting?  Because it came from the Feature Film Program at the Sundance Institute.  As in Robert Redford’s Sundance Institute.  Oh my.

Applying to the lab was a last-minute decision for me.  The application was due May 1st and it’s a pretty comprehensive one as far as applications go.  In addition to an introductory letter and resume, I also had to provide a synopsis of the film, the first five script pages, a list of any crew members attached (along with their respective bios), and an artistic statement.  I was still in Madison as the submission deadline drew closer, coming off of the Wisconsin Film Festival and coming down with a nasty cold.  Oh yeah…I was also desperately trying to complete my 100 pages for Script Frenzy.  But opportunities like Sundance don’t get presented to you that often, so I sucked it up, popped some Airborne, and pulled my entry together.  It was the artistic statement that really threw me for a loop.  I wanted to appear thoughtful and intelligent in my discussion of BENEATH THE SURFACE without sounding grandiose and pretentious.  And I hope my citing ORDINARY PEOPLE as a major cinematic influence didn’t make me seem like I was kissing up to the esteemed Mr. Redford. (He is awfully cool, though, isn’t he?)

I actually dropped off the application package at a FedEx in Madison right before my Mom took me to the airport to go back to Los Angeles.  I imagined the FedEx plane flying in the airspace next to me, both of us heading west with me feeling exhausted, sickly, and hopeful.

For those of you who have been on this bloggy journey with me, you may remember that almost two years ago to the day I shared a similar post when I was informed that AUNT MOLLY’S MELTDOWN was in the running for the lab.  Ah, the excitement and anticipation as I contemplated walking on the same hallowed ground as Darren Aronofsky and Tamara Jenkins, among many talented others.  Unfortunately, I was not one of the esteemed participants selected for the 2011 Lab, but perhaps 2013 is going to be my year?

In any case, I’m honored to be in the hunt once again. 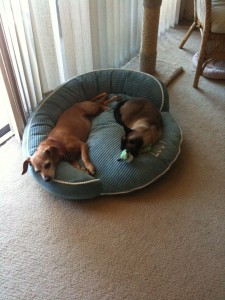 You two can hold down the fort if I’m in Utah in January, right?

This entry was posted in Beneath the Surface, Contests, Sundance Screenwriters Lab. Bookmark the permalink.

4 Responses to Another Round of Sun Dancing