Another Los Angeles Film Festival has come and gone.  I must admit it’s great to now navigate the fest and feel like it’s old hat.  I know where to park my car.  I know how to get to the theatres.  I know where the filmmakers’ lounge offering free drinks is located. (Very important!)  Yeah, I guess you could call me an LA Film fest veteran.  But the real jolt comes from the movies that are shown and the love for indie filmmaking that is expressed.  And that’s why I will continue to attend this festival whenever possible.

Like last year’s blog entry, I will lazily pull movie descriptions from the fest’s “film guide” to highlight my favorites and add my peanut gallery comments afterward.

CALL ME KUCHU: To be openly gay in Uganda is to risk imprisonment and death.  Brave men and women like David Kato, the country’s first openly gay activist, have fought back at great risk.  This intimate and impassioned documentary takes us inside this life-and-death struggle for human rights.

One of my best friends has lived and worked in Africa, so I’m always drawn to content regarding the country.  I didn’t know anything about David Kato going into the movie, but the fact that he was an out-and-proud gay man in such a regimented, patriarchal society piqued my interest.  One particularly disturbing element to Kato’s heartbreaking fight for human rights in Uganda is that a number of American evangelical churches are over there providing much needed services to the country’s poor while also preaching hate against the country’s gay population.  A complex and sobering situation that is intelligently chronicled in this doc.

THE IRAN JOB: American pro basketball player Kevin Sheppard signed on to play for the upstart Iranian Super League team A.S. Shiraz as one of two non-Iranian players (his roommate is a giant Serb).  Sheppard, a gregarious charmer, makes friends wherever he goes and forms a fascinating relationship with three strong, independent Iranian women who bristle at the restrictions of an oppressive theocracy.  Their touching, unlikely bond makes for an illuminating study in cross-cultural understanding.

“Gregarious charmer” is a perfect description of Kevin Sheppard.  And watching him navigate Iranian culture while playing basketball in the country is a fascinating journey.  The friendships he forms with three lovely, spirited Iranian women is at the heart of this movie.  It’s a good reminder that if we look beyond the rhetoric of what is supposed to constitute our “enemy”, we may find a surprising number of similarities.  And you’ll also see some exciting basketball games. 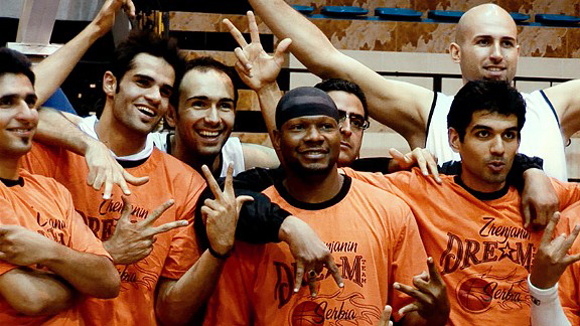 EASY MONEY: A Swedish crime thriller that follows a poor student who leads a double life mixing with the Stockholm elite.  To support his lavish lifestyle and impress the upper class girl he’s fallen for, he’s lured into a life of crime.  His story will fatally intersect the lives of two others: Jorge, a Chilean on the run from the law and the Yugoslavian mafia, and the hitman hired to kill Jorge, whose job is compromised by the young daughter he has to take care of.

This was one of the final films I saw at the fest and I was grateful to end on such a high note.  The action films I love are steeped in well-rounded characters that you actually give a crap about and EASY MONEY provided this ten-fold.  As the lead character got more immersed in criminal activities, and the stakes got higher – and worse –  I was captivated over what was coming next.  This was the only narrative film that I gave the highest score of a “4” when it came time to vote for the audience award.  Yeah, it’s that captivating.

Unfortunately, all of my good will was jettisoned by the discovery that an American version is in the works and who do you think is attached to play the lead?  Zac Efron.  Yep, Zac “High School Musical” Efron. <SIGH>  Please, for the love of God, see the Swedish version first! (And I’ll go out on a limb and say you may as well stop there!)

TEDDY BEAR: Years of working out have given Dennis a massive build, but they have also left him socially awkward, especially around women.  Having an overly protective mother who obsessively dotes on him has only exacerbated his lonely situation.  So when he impulsively heads to Thailand after being told – but not fully understanding – that women there are “easy” to meet, Dennis finds himself treading in unfamiliar emotional waters.

It’s a simple story told more through behavior, gestures, and longing looks rather than dialogue.   Moving, poignant, and anchored by an incredibly subtle performance from real-life body builder Kim Kold, the film provides a touching exploration of a man searching for love.

GAYBY: Neither Jenn nor Matt, best friends forever, is finding much luck in the boyfriend department, so when Jenn’s biological clock begins to tick, she decides to revisit a youthful promise they made to each other – to have a baby together.  As the seriousness of what they are trying to do creeps in, Jenn and Matt attempt to get their careers and romantic lives back on track in time to welcome their gayby.

This was one of the funniest, smartest films I saw at the fest.  The writing is sharp and insightful, and the chemistry between the two leads – who are long-time close friends in reality – makes it that much more relatable and engaging.  It’s going to play at Outfest here in LA, so you Angelenos still have a chance to check it out.

BEAST OF THE SOUTHERN WILD: On an isolated stretch of a land called Bathtub, in the midst of the Mississippi Delta, 6-year-old Hushpuppy and her father lead a fiercely independent existence, one seemingly built on the flotsam and jetsam from a recently struck catastrophe…or perhaps one that is yet to come.

This film was honored at Sundance.  And Cannes.  And all I can add to the conversation is that these accolades are well deserved.  At the Q&A after the screening, writer-director Behn Zeitln talked about his background as an artist (his sister, also an artist, was the movie’s production designer) and that was my “a-ha” moment.  The attention to detail throughout, from the excellent non-pro cast to the meticulously messy living environments to the thoughtfully composed set pieces, make BEASTS OF THE SOUTHERN WILD much like TREE OF LIFE in that it’s more of an impressionistic cinematic fable that one experiences rather than just watches.  I thought about it long after I left the theatre.

Welcome to a New World

Okay, enough of my needless pontificating.  I went.  I watched.  I conquered.

I have to say that the best part of the LA Film Festival was being able to share it with my friends.  A number of compadres made the trek to downtown LA to join me for a screening and it was fun to go out for dinner and/or drinks afterward to talk about what we saw and what we hope to achieve ourselves in this world of storytelling.  If there’s one thing I’ve learned over the last year and a half it’s that it takes a village to make an independent film.  I’m lucky I live in a pretty cool village.