First of all, I want to give a big thanks to Deliberate’s Vice-President of Marketing Barbara Durand for her excellent and informative guest blog entry.  Babs has been instrumental in helping me launch the company and also maintain my own sanity in the process.  I’ve been very lucky to have her as an adviser and sounding board, and I hope she continues to provide guest posts.  I appreciate the occasional blogging break and I always enjoy hearing about her very principled boycotts. (I’m with her on Target, but I can’t give up my Starbucks coffee – I don’t care how much it costs, Babs!)

Worth every inflated penny!

As I work on revising my latest script in my online screenwriting class, I’ve been giving a lot of thought to film openings.  The rule of thumb with screenwriting is that one page of script represents one minute of screen time.  When I applied to the Sundance Screenwriters’ lab with my script Aunt Molly’s Meltdown, the initial part of the application process required the first five pages of the screenplay.  It makes sense that Sundance would be curious about that first five minutes.  I sat down with my script’s opening and realized that I needed to rework it.  Those first five pages are what will hook in your audience…or not – and I wanted mine to be funny, dynamic, and memorable.  After all, I can usually figure out in the first five minutes of watching a film whether or not I’m on board with it.  And while I didn’t make it into the Sundance lab, I did make it past that first round with my five pages.  Of course, every page matters when telling a story, but those first five are especially critical.  Can that first impression keep the audience leaning forward? 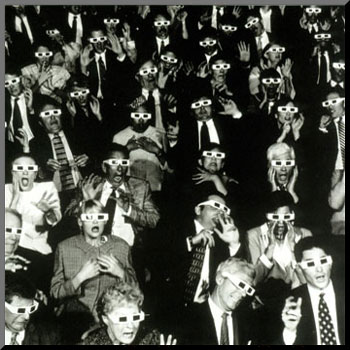 Do we have your attention?

Sometimes film openings are not all they promise to be.  But I have witnessed a couple of clever openings that managed to hook me in even if they didn’t deliver on their initial promises.  The American starring George Clooney provided one such opening.  I will issue a SPOILER ALERT now so if you plan on watching the film and don’t want to know how it opens, you may want to stop reading this entry.  I have to say these were five cinematic minutes that made me gasp out loud in my living room.

The film begins in chilly, icy, snow-covered Sweden.  We cut to the inside of a cozy cabin where we find George and an attractive brunette lady.  Clearly the two have been keeping each other warm and toasty in this cabin, and they’re now enjoying the post-coital glow coming from the fireplace before them.

Don't get too attached

Then we cut to the bundled up couple trudging arm-in-arm through the barren, snowy landscape – they appear comfortable and happy as they walk together.  They come upon a set of footprints in the snow.  George immediately tenses up, on full alert.  The woman suggests that hunters may be in the area but as she studies the single tracks she observes that hunters usually travel in pairs.  Just then, GUNSHOTS ring out!  Bullets strike the ground around the couple.  George pulls out a gun – much to his companion’s surprise – and drags his ladyfriend behind a large rock for cover.  He returns the fire and after a few rounds back and forth, while the woman cowers in horror, George finally shoots the mysterious man who is trying to shoot him.  His ladyfriend, clearly in shock over these unexpected events, freaks out at the dead body now crumpled in the snow before them.  George commands her to return to the cabin and call the police.  She nods, slowly regaining her composure, and begins to leave.  And just then, as she heads away from George, he aims the gun at the back of her head AND SHOOTS HER!!!  WHAT THE WHAT?

It was nice knowin’ ya, ladyfriend!

It was such a blod, unexpected moment – and it also gives us a world of information about Clooney’s character.  This is not going to be the suave, smug George of Oceans Eleven, is it? Alas, the rest of the movie didn’t live up to that first five minutes, but I admired the fact that it was a film opening that not only caught my attention – it demanded it.

NEXT UP: And the Oscar nomination goes to…