I admit I’ve felt a bit scattered during this recent trip to Madison.  While it’s always nice to be back in my Wisconsin home, I was also just starting to get settled into my new South Pasadena home.  So, I’m feeling a bit torn between two residences.  I guess I’d better get used to it now that I’m a gypsy indie filmmaker; however, it’ll be easier when “the girls” are with me full-time wherever I may be.  I’m definitely going through pet withdrawal. 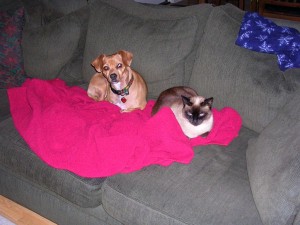 Please don't forget about me, girls!

Not to mention the fact that I’m still adjusting to my life of self-employment.  I’m the task master of my own tasks and guess what?  I can be kind of a lenient task master.  Some days I’m in the zone and other days I just want to curl up with The Girl Who Played with Fire. (For instance: Today!)  I guess as long as I’m exercising my brain beyond a marathon of The New Housewives of Dubuque, I’m being mildly productive, right?

The Return of LISBETH!

The hunt for investors continues.  I have had some very good meetings and correspondence during this visit, many thanks to Executive Producer Dad.  While not everyone can open their checkbooks, I’m encouraged by the enthusiasm and support I’ve encountered along the way.  Each conversation has led to other potential conversations, so I continue to follow the yellow brick road.  I just have to remind myself that every independent film produced out there raised money somehow – it can be done.

This past Saturday I experienced two “firsts.”  1) I visited the quaint town of Mineral Point, Wisconsin and 2) I was there to watch a documentary film on Aldo Leopold.  Line Producer Nick Langholff invited me to the screening so I figured it was a chance to see an interesting film and touch base with Nick about Beneath the Surface. I’ve never been to Mineral Point before and as I drove through Southwest Wisconsin, I was reminded of the beauty of the state’s rolling hills and farm land.  I actually love to drive – especially in wide open spaces – and I think road trips have always provided me with the thinking ground for future stories and ideas.  Mineral Point, population 2400, is a special town filled with organic restaurants, unique art galleries, and a beautifully restored Opera House where Green Fire: Aldo Leopold and a Land Ethic for Our Time was screened for a very supportive community.

I’m more embarrassed to admit that I wasn’t familiar with Aldo Leopold.  Leopold lived in Wisconsin and taught at the University of Wisconsin-Madison.  He is credited with being the father of the conservation movement – and this is a man who died in 1948!  He wrote the book A Sand County Almanac which is a lovely, thoughtful collection of essays that serves as a tribute to nature and man’s role in it.  He’s been compared to Henry David Thoreau in terms of his poetic observations.  I’m so glad that the documentary acquainted me with Leopold’s significant impact on conservation.  Better late than never!

Each chapter of the book is dedicated to a particular month in which Leopold notes his observations from a beloved, much-visited shack along the Wisconsin River.  At the risk of highlighting my own lack of eloquence, I figured I’d share an excerpt of one of his passages from the month of April.  It speaks of the Draba flower…please enjoy!

Within a few weeks now Draba, the smallest flower that blows, will sprinkle every sandy place with small blooms.

Draba asks, and gets, but scant allowance of warmth and comfort; it subsists on the leavings of unwanted time and space.  Botany books give it two or three lines, but never a plate or portrait.  Sand too poor and sun too weak for bigger, better blooms are good enough for Draba.  After all it is no spring flower, but only a postscript to a hope.

A Postscript to a Hope

NEXT UP: The Brenner Girls Take Chicago!