No, this post is not about the impending release of TITANIC 3D (yikes!) but, rather, it is about a software program called MOVIE MAGIC. (Uh huh, computer software.  Can it get anymore exciting?)  Lest you think I have only been consumed by script finishing and Oscar ranking lately, I am still very much immersed in a Deliberate state of mind.

Movie Magic is a scheduling and budgeting software that is pretty much the industry standard.  I used it for my budgets at Nickelodeon, but was unfamiliar with the scheduling software since it’s more applicable to live-action films (although I suspect you could adapt it to animation).  But since it is more applicable to live-action films, I jumped at the chance to learn how to use the software when Film Independent offered a class on it over two intensive days this past weekend. 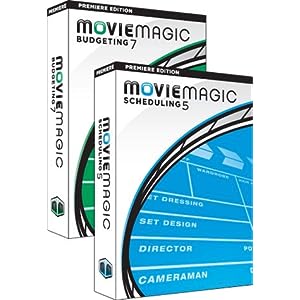 Schedules and Budgets and Breakdowns, oh my!

Quick segue: as I compile a mental list of “must-do” suggestions for first-time filmmakers, joining Film Independent (FIND) would be one of them.  In addition to running the LA Film Festival and the Independent Spirit Awards, this non-profit organization provides an abundance of support and information for independent filmmakers.  And if you’re based in Los Angeles, you can take advantage of the many classes, labs, and industry panels offered through FIND.  Check it out: http://www.filmindependent.org/.

The Movie Magic class was taught by Line Producer Jonathan McCoy and he had us bring in our laptops and download a free trial of the software so we could actually get into the nuts & bolts (i.e. stripboards & spreadsheets) of it.  Using one of the films Jonathan worked on, THE JANE AUSTEN BOOK CLUB, we broke down the script and implemented it into the scheduling software.  I won’t bore you with all of the technical details, but the writer in me was amazed at how our word designations translate to dollars on the screen.  I’ve always known it to be true, but going through the painstaking process of scheduling out a script really nailed the point home.  For example, whenever there’s a child in a scene, that child actor may include a studio teacher depending on when you film during the school year. (Ka-ching!)  And if there’s an animal in a scene, you’ll probably need an animal wrangler. (Ka-ching!)  And while it may seem inspired as you’re typing away on your keyboard to set a scene at the State Capitol building, you may not get permission to shoot there.  So you’ll need to have a back-up plan. (Ka-ching, ka-ching!)  Ah, the moving target that is a film production.

Let's make sure the money doesn't go THERE!

And even though I’m working with a Line Producer who will provide his own pass of the schedule and budget for BENEATH THE SURFACE, I went ahead and invested in the Movie Magic software.  It can only help to be armed with information, right?  I guess it’s good that my producer-writer moniker should alleviate any creative differences when adjustments or <gasp!> compromises to the script do need to be made.  Or I’ll just have lots of arguments with myself. (Wouldn’t be the first time…)