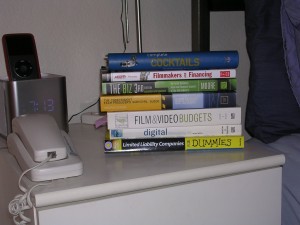 What's on *your* night stand?

I have a friend and former Nickelodeon colleague, Athena Lobit, who produced an independent film with her sister, Alyssa, called The Things We Carry.  It’s a gorgeous, deeply-felt movie about two sisters coming to terms with their turbulent relationship as experienced through their crack-addicted mother.  The film has found a lot of success on the festival circuit and you can rent it on Netflix.  So go put it in your queue.  Now.

Anyway, The Things We Carry was accepted into the Wisconsin Film Festival, so I flew home this past April to attend the packed screening of it with my family.  At the Q & A afterwards, Alyssa said something about independent filmmaking that continues to stick with me: “It’s impossible and possible.”

When I look at the stack of books in the photo above, I feel the weight of the impossible.  The business plan, the financing, the deal-making, the terminology…yikes!  But then I think about The Things We Carry.  Athena has been a real mentor and inspiration to me about this process because she and Alyssa set out to make a low-budget film and they did it.  THEY DID IT. Athena loaned me most of those books (okay, not the Cocktails one – that one was already in my collection), and I know the books will offer me some good schoolin’ in movie-making.  After all, educating ourselves is a pretty effective way to make the impossible possible, right?  (Knowledge is power and all that…blah blah blah…)  That’s why I am also reaching out to anyone I know who has experience or friends in film production or “the industry. “  I am a sponge…watch me learn!  And to those of you who have already offered me advice or possible resources or just plain old encouragement, I issue a huge, appreciative THANK YOU!

And for what it’s worth, I’ll also – occasionally – reference the book of cocktails during this journey because a little Maker’s Mark can make anything seem possible! 😉

NEXT UP: The Project!

3 Responses to My Summer Reading