Not So Ordinary People

I took a bit of a detour on my road trip back to La-La land so that I could stop in Longview, Texas.  Why did I venture into the world of God, guns, and burning-like-crazy wildfires?  Well, a number of years ago my friend Jillian Reilly and I wrote a screenplay based on the true life story of Marolen Mullinax.  Our subject, Marolen, lives in Longview.

A little background first: Jill and I met at Northwestern and became fast friends.  After college, Jill headed off to South Africa and spent years both there and in Zimbabwe working for non-governmental organizations with a specialized focus in HIV/AIDS-related issues.  Through her work, Jill came to hear about another American woman in Romania who was making groundbreaking inroads caring for HIV-postive orphans.  That woman was Marolen Mullinax.

Jill and I have always shared similar interests and the same sense of humor, which has made for loads of memorable, entertaining experiences.  One of the things I love about Jill is that as intelligent and well-informed as she is, she’s also one of my favorite pop culture cohorts.  We have enjoyed Project Runway marathons together as well as suffered through many a bad movie.  And in doing the latter, we often lament the lack of good female roles available out there in movieland.  So when Jill heard about Marolen’s story and relayed it with me, we saw it as our chance to share a woman’s amazing experience with a wider audience.  We flew to Texas to meet Marolen and see if she might give us permission to tell her story.  Luckily for us, she did.

What’s the story?  Well, it began in the early nineties when Marolen left her home state of Texas to live in Romania.  This was soon after the dramatic fall of Communism and the oppressive rule of Nicolae Ceausescu, and the country was in crisis.  The world was discovering that tens of thousands of Romanian children had been abandoned to poorly-run state institutions – and many of the kids were HIV-positive due to unsanitary blood transfusions.  One of Ceausescu’s decrees had been to create a “worker’s army,” so he outlawed abortion and required women under 40 to have five children.  When it became untenable for families to sustain additional children, many of these kids were turned over to state orphanages that were ill-equipped to handle such an influx of children. 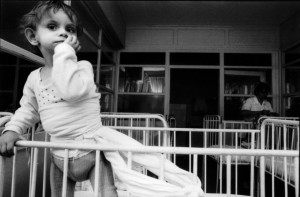 Marolen was in her forties, twice-divorced with two grown children, when she saw the coverage about these forgotten children on the news one night.  Although she knew nothing about Romania, let alone HIV/AIDS care, she felt compelled to help.

She linked up with an organization that was providing housing to a handful of HIV-positive children and they sent her to Constanta, Romania to live with and care for the kids.  Needless to say, it was an extremely challenging experience.  Marolen was confronted by an environment that was hostile to both her, as a foreigner, and the sick children for whom she was caring.  But this Texas rose has some thorns and she wasn’t about to give up.  While she was instructed to simply give the children a comfortable place to die, she made it her mission to help them live.  She was extremely resourceful when it came to providing adequate food and medicine to the children and she built relationships with sympathetic locals who helped her in her cause.  Major organizations got wind of Marolen’s successes and, with her assistance, replicated her methods in similar orphanages throughout the world.

She gave them a House of Hope

In writing our script, Jill and I decided to create a fictional character who is based upon Marolen.  We felt this would free us (and Marolen) in our storytelling, yet we were also determined to include as many actual experiences as possible since they’re so remarkable.  Marolen has been involved every step of the way and we were extremely relieved when she gave our script a thumbs up.  Now it’s up to us to get it sold and get her story out there.  C’mon, Sandy Bullock!  This one’s right up your alley!

Wouldn't you like another book end to go with that?

And a special thanks to Marolen for letting me and Lucy stay with her on our drive back to LA.  I’ll make it up to you when you come out to Hollywood for the film premiere!

NEXT UP: I don’t know.  And, in fact, I’m not going to commit to this “NEXT UP” nonsense anymore unless I really have something on my mind.  For now, I’ll just go with the flow. (But my next entry may discuss my newly discovered love for the AMC network!  MAD MEN and BREAKING BAD – who knew?)

2 Responses to Not So Ordinary People