On the Road Again

Well, tomorrow it’s time to hit the wide open road again.  Unfortunately, I do not have my trusty co-pilot, VP Babs, along for the trip back to La-La land.  Yeah, her actual day job doesn’t allow her the benefit of taking another cross-country road trip.  (What inflexible task-masters, huh?)  Barb, I will think of you as I listen to more audio books while munching on pretzel crisps and Jujyfruits!

Of course, Lucy will be my number one passenger with her consistent contributions of sleeping and snoozing in the back seat.  If only she could master learning how to drive in the same way she knows how to “sit”.  I know that she is going to experience serious Madison withdrawal considering all of the attention she’s received since she first set her paw here.  Our accommodations have been top-rate (HUGE thanks, Peter & Amy!) and my nieces are certainly the best dog-walkers in town.  And who can deny the luxury items Lucy received courtesy of Grandma Brenner? 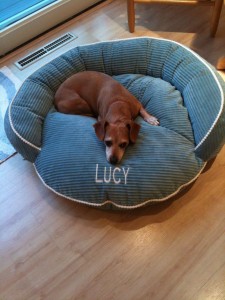 While my search for financing has stalled a bit, I have found that writing is the best medicine.  I started a new script while here and I’m hoping to have a Frenzy-ish September in LA where I can complete my first draft.  I was also encouraged to learn that BENEATH THE SURFACE placed in the top 10% of the Austin Film Festival Screenplay competition – out of 5,800 entries.  As a “second rounder”, I can attend a couple of writing panels/workshops offered only to those of us who placed in the contest.  So, I’ve made my arrangements and I’ll be heading to cowboy country at the end of October.  (Here’s hoping Austin’s not still on fire by that point.  Gulp!)  I’m excited to finally see the city that has often been compared to Madison due to its creative streak and fierce progressiveness, as well as meet and reconnect with more talented filmmakers, learn some new information about screenwriting, and see a bunch of inspiring independent films.  Hee Haw!

Nothin' like a little BBQ sauce with your cinema!

NEXT UP: Speaking of Texas, Meet Marolen Mullinax!

One Response to On the Road Again