I stumbled across the beginning of Superman this past weekend.  What an amazing movie.  And I’m talking about the original Richard Donner-directed one, not the bloated, empty Bryan Singer version.  I remember seeing Superman when it first came out in 1978.  I was only nine years old, but I was totally blown away by the wonder of it all.  I really did believe a man could fly.

Watching it again in the year 2010, I was struck by how it still holds up.  For me it is the quintessential superhero film, high above the rest.  I only got to see the first twenty minutes of it, but I wondered if a big-budget franchise of today could open in the same way?  For the beginning isn’t some big, explosive, action-laden set piece; rather, it simply establishes the origin of this particular superhero.

It opens on the planet Krypton where we meet the principled Jor-El (father to the future man of steel – and played by the superhero of actors, Marlon Brando).  He leads a tribunal against some traitors to the planet (conveniently setting up Superman 2) and then unsuccessfully tries to urge his peers that Krypton is on the brink of destruction.  He can’t convince them, though, so he makes the choice to send his infant son off in a star/snowflake-shaped satellite to have a future on a distant planet called earth.  It’s all very serious and, some might say, ponderous, but I’d argue that it effectively presents us with Superman’s back-story and makes us care about the character.  We get on board with this strange creature and his superhuman powers. 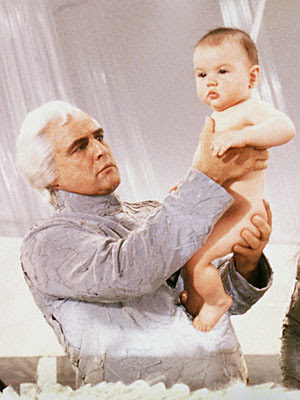 I didn’t get to watch the rest to the film, so I missed the lovely performance by Glenn Ford as the earth father to Clark Kent/Superboy.  Yet, I remember so vividly how powerful those early scenes are in the film.  Again, they set-up the emotions that the boy wonder has to contend with – being a stranger in a strange land, feeling both attached to its inhabitants and isolated by them.  We empathize with him and also aspire to be like him.  And, of course, when Superman is fully realized and makes his way to Metropolis, then the real fun and games begin!  Lois Lane, Lex Luther, Perry White – all rich, layered characters who are grounded enough in reality to keep the emotional stakes high for Clark and Superman.  Breathtaking adventure all around.

And is there a better opening credit sequence in the history of film?  Against a black backdrop, names fly towards the audience while the incredible John William theme plays underneath.  Maybe the purpose of such exciting credits are to counter the more serious, dramatic, anti-action tone of the opening scenes.  In any case, those credits are AWESOME!

NEXT UP: Did I mention I’m in escrow?