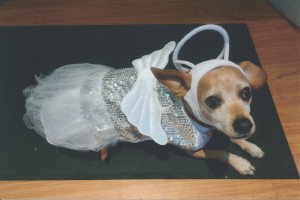 A Devil costume would probably be more appropriate…

Oh, bloggy, I know I’ve been remiss in keeping up with you.  Please forgive me.  I am traveling to London in a couple of days to spend another Thanksgiving with VP Babs and CFO John and my hope is to provide brief-yet-regular posts during my time across the pond.  Between CineStory, the Austin Film Fest, and the American Film Market, the past five weeks have been incredibly busy, but also highly informative.  And this blog offers me a chance to process the wisdom being dumped into my grey matter.

I’ve also been taking another online screenwriting class in which I’ve been revising a script that is very dear to me: THE LEGEND OF DENNY O’DOYLE.  A coming-of-age story set in the 1950s and based on my Dad and his high school friends, the script was one of my first screenwriting efforts.  It’s drifted on and off of my computer screen for a number of years now, but I finally felt like it was time to take another crack at it.

One thing that’s been on my mind since attending all of these writer retreats and panels is the idea of “voice” and how one hones it so that it’s compelling and singular and keeps a reader leaning forward.  My voice has definitely evolved, but I still struggle with making it distinct yet organic.  As I’ve blogged about earlier, I’ve recently been sifting through drastically opposing feedback on AUNT MOLLY’S MELTDOWN, so I thought that script would be a good one to bring to CineStory last month.  One of my mentors there who read it expressed the primary note that my voice was inconsistent – she thought it needed to be weaved throughout the piece in a more cohesive fashion.  <SIGH>  Not what a writer wants to hear.  However, she suggested that the next time I rewrite the script, rather than simply tackle the sections that I think might need work, I actually TRANSCRIBE THE WHOLE THING from start to finish.  That way, even the sections that don’t need revising would still get a thorough kerplunking on the keyboard.

Of course, my extremely lazy proclivities dreaded the idea of retyping every friggin’ word, but I sensed she was onto something with this exercise.  And since DENNY O’DOYLE is on deck and also one of my earliest works, I figured I’d use that script as my first rewriting experiment.

So as I painstakingly revisit each and every description/line of dialogue/syllable, I am analyzing and wordsmithing even the “DLB-approved” scenes.  And guess what?  I tweak and finesse and change all of them – and I know I’m improving them.  I guess I’ve realized how a writer’s voice takes a while to evolve and I know I’m a much stronger writer now than I was when I started DENNY O’DOYLE.  So I need to do the hard work of injecting my progressing voice throughout the entire piece.

Is it a tedious process?  Absolutely.  But it’s also a critical learning tool for me and, hopefully, makes for a stronger script and better writing overall.  Because the one prevalent refrain you hear at all of the panels and roundtables and discussions is that it’s not enough to write good scripts.  You have to write great ones.  And why wouldn’t you want to do that?