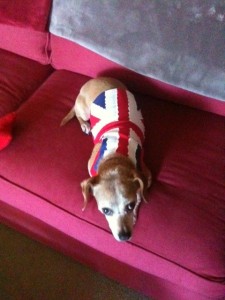 Mom & Dad were here in London for Thanksgiving (in fact, we just sent them back across the pond this morning) and my father was amused by the fact that the weather for a large part of our stay was forecast as “dull and damp” – so very British, eh?  Yes, there have been gray clouds hanging low in the sky and a fair amount of precipitation but, fortunately, the visit here has been anything but dull and damp.  We all shared another successful Thanksgiving with Barbara and John’s friends where we ate and drank our way through name mispronunciations, hilarious stories, and general American-sized merriment.  My U.K. Thanksgivings have become a tradition I truly anticipate and enjoy, despite the mea culpas my waistline will be doing when I return home to the healthier living found in La-La land.  No more pints and chips for me.  We also took Mom and Dad to see the stage musical BILLY ELLIOTT at the gorgeous Victoria Palace Theatre.  It was a fitting celebratory evening of fine dining and good theatre for what was their 47th wedding anniversary. (Granted, it might have been a bit more romantic without me and my sister and brother-in-law tagging along, but I think they still had fun.)

It’s been a while since I saw the film BILLY ELLIOTT, but I remember really enjoying it and being particularly impressed with young Jamie Bell’s performance.  It was astounding enough that he could act and dance so imagine the musical version where the twelve-year-old Billy has to act, dance, and sing.  Luckily, young Harris Beattie was a triple threat on all counts.  There was one particular sequence in the musical that reminded me of the power of live theatre and the way it can create magic right before your eyeballs.  Young Billy is imagining the future he could have as a dancer and he hears the music to Tchaikovsky’s Swan Lake.  As the piece crescendos, Billy begins dancing alongside an older dancer dressed exactly like him – their moves are identical, as is their joy for dancing.  Essentially Billy is sharing the stage with his future self.  Such a simple number yet one of those stunning, moving moments that takes your breath away.  All of the hope and potential of this boy’s journey encapsulated in one gorgeous sequence.

Lee Hall, the writer behind the film and the book & lyrics for BILLY ELLIOTT, sums up the purpose of his prose far more eloquently than I can, but in a way that certainly resonates for me.  He writes: “If BILLY ELLIOTT is about one thing it is that we are all capable of making lives for ourselves which are full of joy and self-expression, whilst we may not all become ballet dancers we are capable of finding moments of real profundity and creativity whatever our circumstances.”