The (Wisconsin) Week in Review

I’m actually surprised that the post-holiday week is over.  It was a busy one considering I didn’t have a job to report to for the first time in YEARS.  Then again, I shouldn’t be surprised that self-employment is going to be a 24/7 gig.  And I admit: I’m loving it!  Of course, it’s nice to have these first few weeks based at Mom & Dad’s house where the cupboards are well stocked, the cocktails flow promptly at five o’clock (okay, usually at my insistence), and the laundry fairy visits on a regular basis.  Lucy and Sophia need to get into gear when I return to La-La land. 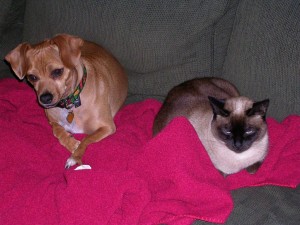 Mommy likes her shirts on hangers!

Last Sunday I met with Nick Langholff who is attached (that’s a big-time Hollywood term for “involved-despite-the-current-lack-of-money”) as the Line Producer for Beneath the Surface.  I’m too lazy to go through my archives to figure out if I’ve mentioned Nick before, but I met him through a mutual friend. (Mr. Coppola, as a matter of fact.  See I do remember a few early entries!)   Nick is a fellow Wisconsinite – he grew up in Fort Atkinson and he’s worked on film projects big and small.  He has a special interest in bringing more filmmaking to America’s Dairyland and, having worked on a couple of recent independent films in the state, he brings a specialized knowledge of the filmmaking scene here. (Translation: because of his connections, he’s great at cutting corners but not quality.)  As Nick and I talked about schedule/budget/gameplan, it all started to feel increasingly REAL.  As long as I raise this money, we’ll be producing Beneath the Surface here next summer.

The Man with the Plan

I also re-connected with John Urban, an old Madison friend who is an exceptionally creative, clever person.   And, yes, I will pay due respect to Facebook for bringing us back together; John sent me a “friend” request and the rest is history.   John is a filmmaker/writer/photographer/Renaissance Man here in town and he’s not only extremely talented, but he’s also well connected.  One of his missions is to support local music and he does this via Madison television.  Fellow Cheeseheads can look into airing times on the Urban Theater Facebook page (and I’m guessing those outside the state can still find episodes via You Tube): http://www.facebook.com/theurbantheater.  John and I had a great lunch where we talked movies, writing, and also shared a few secrets.  I know that when the time comes to shoot here in Madison, John will be a valuable advocate and resource.

Madison's Patron of the Arts

The week came to a close with a triumphant lunch with a successful and dear family friend who is OFFICIALLY investing in Beneath the Surface.  Yes, I think I can announce that I have raised 20% of the funds needed for the film.  I am so humbled by this particular investor – he shared a lot of his own experience and insight about starting a business and taking risks in life.  One of the things he said to me was, “Don’t overthink why people want to give you money.  I can see you’re ready for your chance.”  Wow.  Humbling, indeed.

NEXT UP: And now introducing…VP Babs! (Okay, sis, the pressure is ON!)