When it’s Good to Interrupt

I experienced another whirlwind trip to Wisconsin to attend the Driftless Film Festival last weekend.  My co-producer on BENEATH THE SURFACE, Nick Langholff, is a co-founder of the festival so I wanted to be there to offer my support and see some good indie films.  Like me, Nick grew up in Wisconsin and shares a deep affinity for our home state – we want to make movies there!  The Driftless Film Festival takes place in the southwestern region and covers a number of small towns in the area, including Mineral Point, Spring Green (home of Frank Lloyd Wright’s architecture school Taliesin East), and Baraboo (former headquarters of the Ringling Brothers’ Circus).  I covered a lot of ground over the five days of the festival as I drove from town to town (thanks, Alicia, for loaning me your wheels!), but I couldn’t have asked for nicer weather or prettier scenery.  The gorgeous autumn foliage was complimented by temperatures in the high seventies.  Granted, it probably makes sitting in a darkened movie theatre a tougher sell when it’s so perfect outside, but I’m glad I found the balance in both. 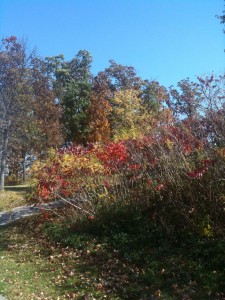 A little fall foliage with your films?

In addition to seeing one of my LA Film Fest favorites again – AN ORDINARY FAMILY – I encountered a new documentary that I thought was just tremendous: THE INTERRUPTERS.  THE INTERRUPTERS was made by filmmaker Steve James who is best known for his Oscar-winning documentary HOOP DREAMS.  In his latest film, James explores the work of a Chicago organization called Cease Fire which attempts to “interrupt” street violence before it happens.  The subjects of the film are men and women who grew up in some of Chicago’s most violent areas and became active participants in the gang culture there.  Most of them have served time in prison for the activities of their youth and they are now looking to break the cycle of violence that still consumes their neighborhoods and cruelly claims the lives of young people.  Through mobilizing, communicating, and building relationships within the community, the members of Cease Fire attempt to diffuse escalating tensions that can arise over the simplest of gestures.  It’s dangerous work but they’re doing what they can to bring hope back to often hopeless areas.

It takes a village

James’ film is powerful and provocative, made all the more so by the dynamic subjects who channel their guilt over past offenses into positive actions for the future.  One of the main players in the film, Cobe Williams, attended the Driftless screening and answered questions about the movie and his work with Cease Fire.  In watching Cobe engage with my fellow film goers, I was reminded of the influence that cinema can have on an audience – the work of Cease Fire certainly touched the people who were at the screening and brought an awareness to a cause that deserves plenty of attention, recognition, and support.

Thanks for coming to Wisconsin!

For more information about THE INTERRUPTERS and Cease Fire, you can check out this link: http://interrupters.kartemquin.com/

And if you’re able to catch a screening of the film, GO!  I predict you’ll be hearing about it again come Oscar time.