Zen and the Art of Mental Maintenance

It seems like only yesterday when I excitedly proclaimed that my condo was on the market.  Yes, I was entering the world of open houses and museum-like living and offers and escrow…all happening in order to more easily bankroll my 2011 lifestyle as an independent filmmaker.  Of course, I figured a spacious, well-maintained home like mine would be snapped up in an instant.  Sure, it’s not the best housing market.  Yeah, foreclosures are as frequent as Sarah Palin’s godforsaken tweets.  And the sales in my neighborhood aren’t exactly in the “financial security for years to come” range.  But I know my asking price is reasonable.  My neighborhood is desirable.  The HOA is small and friendly.  And let’s not forget the beautiful garage that Sergio painted!  Uh huh…my condo is pretty dang comfortable, if I do say so myself.

And yet, I am still here…as in still living here.  Almost five months after first putting my condo up for sale.  No solid offers, no thirty-day escrow, no supplemental future funds.   Ah, those pesky best laid plans.

When I was in London I had a few restless nights.  I blame the jetlag, but those two a.m. tossings and turnings can lead to further anxious thoughts about the immediate future.  For the first time in almost ten years, I won’t have a job to report to in the morning.  At least not one that comes with the security of a weekly paycheck.  Oh yeah, and let’s not forget about those health benefits.  I’m gonna be paying how much a month?!?  <GULP!>

During one of my nights in the U.K., I awakened from a dream that had me clinging to the top of a super high tower that was positioned over the ocean.  We’re talking airplanes-flying-right-next-to-you high. This is as good (and as ankle-weakening) an example as I can give you.

Tower Climbing – Not for the Faint of Heart

I wasn’t sure if the goal was to let go of the tower to see if I could fly or to hang on tight to it so I wouldn’t freefall into the waters a mile below.  I woke up before I could commit to an answer.  Of course, it doesn’t take a genius to see the correlation between my dream and my future reality.  And I wish I had an inkling of where this next quest will take me.  But, then again, I guess that’s part of the fun of it.  The total unpredictability.  It’s both disquieting and sort of thrilling.

I also saw one of my dearest friends while in London and she helped me put things in perspective.  Jill was expecting her second son during the course of my visit.   His due date came and went while I was there, which allowed me to have some laugh-filled, leisurely lunches with my very pregnant friend.  Jill was surprised that baby boy #2 hadn’t arrived yet (her first son was early), but she said that she hit a point when she realized and accepted that she had absolutely no control over his debut date.  She was on his clock.  There are times when you just have to surrender to the universe. 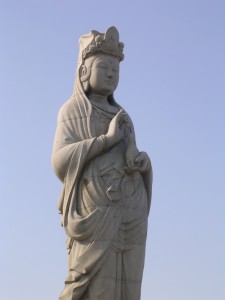 In a Zen State of Mind

So I am taking deep breaths and submitting to the next chapter.  If there’s one thing I know for certain, it’s that I must keep moving in this direction.  Escrow be damned!

NEXT UP: The Dream Police and Dragon Tattoos