A number of friends and fellow Facebookers have commented on the recent passing of Irvin Kershner.  For those of you who don’t instantly recognize the name, he directed what I (and many others) think is the best of the Star Wars opus, The Empire Strikes Back.  I have watched this film multiple times and for me there’s a scope and an emotional depth to it that sets it apart from the other movies (and certainly the most recent, lame-ass trilogy).  Plus, as I’ve mentioned before on this blog, the film will always hold a special place in my heart for introducing me to Harrison Ford in his hunkiest Han Solo prime.  Oh, how I wished to be Princess Leia hiding out with him in the Millennium Flacon on that meteor.

Being hunted by Darth Vader does have an upside!

Kershner’s death was a bit of serendipitous timing because I recently revisited a book that chronicles the creation of the Star Wars world.  It’s called STAR WARS: The Annotated Screenplays by Laurent Bouzereau and it features the scripts of Episodes 4-6 (again, the superior chapters) along with commentary from many of the key players involved in shaping life in a galaxy far, far away.  Those interviewed include George Lucas, Irvin Kershner, Production Illustrator/Design Consultant Ralph McQuarrie, and Screenwriter Lawrence Kasdan among others.  I highly recommend it for those of you who love Star Wars, but also for those of you who love writing because I think there are some Yoda-esque pearls of wisdom to be found in it. 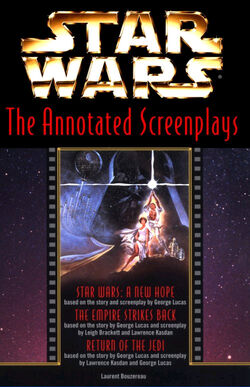 There are two pieces of advice from George Lucas that I try to keep in mind when constructing and deconstructing a celluloid domain.  Now Lucas is considered to be a fairly weak writer – in fact, one of the reasons why Empire is so strong is because Lucas didn’t write the script.  Rather, he turned to the creative brains of Lawrence Kasdan and Leigh Brackett to flesh out his original concept.  But Lucas clearly knows a thing or two about story and while he was concocting these incredibly elaborate, imaginative worlds, he also recognized the importance of letting things go during the process.  As he states in Bouzereau’s book:

A script starts off big because you’re trying to define the characters and the plot, but the work you do after the first draft is to make sure that you tell a very precise story and that you take out everything that’s not relevant to your plot.

The thing about writing is that ideas aren’t precious; you have to get over the thought that everything you think up is brilliant.  When you think of something, you have to be willing to throw it away.  More important than to think up an idea in the first place is to be able to reject it if it doesn’t work, if it doesn’t fit.  You have to be very hard on yourself when you write a script and only use things that are symmetrical to the center of your story.

I think Lucas is correct when he stresses, “More important than to think up an idea in the first place is to be able to reject it if it doesn’t work.”  Ah, it is so easy to get caught up in our own “brilliance” as writers that we can quickly lose sight of the overall picture.  What a skill it is to meticulously trim the fat while keeping the meat of the story intact.   As the saying goes, “Writing is rewriting.”

Now if only Lucas had followed his own advice when he came up with Jar Jar Binks!

WHAT were you thinking, George?!?

NEXT UP: The Best Laid Plans – Take 2