Meditations from the Midwest

Autumn is my favorite time of year and it is particularly beautiful in Wisconsin.  And right now it’s also seventy degrees here.   We’re in October, right?  I could get used to this.

Check out those colors!

I have spent the last few days working out of my mother’s office: Marcia Brenner Associates.  My sister, Alicia, and brother, Peter (aka: the Prince), work here, too, so it’s a full-fledged family affair.  It’s been nice hanging out in the conference room – partaking of the free soda and internet access.  I have a feeling I will be spending A LOT more time in this room come 2011.  I think Peter is already trying to figure out how much to charge me in rent. 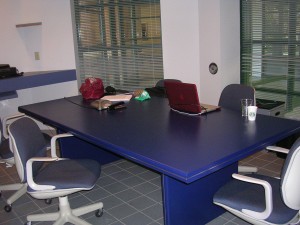 Executive Producer Dad and I have been finalizing the business plan.  We had our first official conference call with Stuart Markowitz (aka: attorney for Deliberate Productions) to get his insight on federal tax incentives.  After analyzing the potential numbers, I think my Dad has concluded that Hollywood studio executives  are worse than Wall Street executives.   We have our gameplan, though, and we’re starting to put out the proverbial feelers for accredited investors.

The trip overall has contained ups and downs – since inconsistency and unpredictability seem to be the norm on this movie-making adventure, I’m just trying to go with the flow.  It’s always an “up” to spend time with my family – especially my two kooky nieces.  Their refreshingly straightforward world-view helps me keep my own in perspective.

Obviously, it was disappointing that Dad and I had to cancel our fundraising events.  It was yet another reminder of how challenging the money-raising is going to be.  Investing in movies is a high-risk venture, so how do I make Beneath the Surface stand out as a potential money-maker?  Every little bit of validation helps.

Is it misleading to say Taylor Kitsch is attached? (In my fantasies...)

Alas, that validation didn’t come by way of a Producers Lab offered by the Los Angeles organization Film Independent.  Film Independent runs the LA Film Festival as well as the Independent Spirit awards – it’s an impressive organization dedicated to educating and supporting the independent filmmaker.  The organization hosts a seven-week Producers Lab, complete with comprehensive seminars and discussions, for budding producers who have a specific project they’re trying to get off the ground.  I applied for it back in July and found out yesterday that I (Applicant #1854) am not one of the twelve lucky participants selected to take part in it.  <SIGH>  I know it would have provided some great insight, practical advice, and helpful exposure at an ideal time for me since I’m at the beginning of my journey.  Being part of that lab would have also given Beneath the Surface that extra oomph of validation.  I find myself once again drawing from the coaching staff of the New York Jets (as seen on HBO’s Hard Knocks): discouragement is the strongest tool in the Devil’s arsenal.  So I’m banning it from my brain and still keeping my fingers firmly crossed for Sundance!

Please believe in me, Bob!

As for the other “ups” of the week…

While in NYC, I chatted with a highly successful producer there who I met through a mutual friend.  The guy had a big hit a couple of years ago that has catapulted his company into major film and television deals.  The best part about him, though, is that he’s a really cool, down-to-earth person.  We talked for about half an hour and seemed to share the same cinematic sensibilities.  I pitched him a few of my script loglines, including Beneath the Surface, and he asked to take a look at my work.  Three script PDFs have now been e-mailed off to him and I’m hopeful that he might take an interest in one or more of my projects.

Do we have a deal?

Another “up” occurred on Wednesday night, which was supposed to be the night of the “wine & cheese” fundraiser.  Dad and I thought it might be a good idea to head over the restaurant where it was supposed to happen just in case any invitees appeared for the canceled event.  We parked ourselves at the bar with a clear view of the front door.  No stragglers showed up, but we did end up talking with the man sitting next to us.  His name is Larry.  Larry works in flood insurance.  Now, I realize this may not sound like the most glamorous of encounters, but it’s significant to me because the catalyst for my film is the discovery of a car at the bottom of a flooded out lake bed.  Yeah, when you’re the writer typing that setting into your script it sounds like a powerful, haunting opening image; but, when you’re the producer trying to figure out how the heck to execute it, a few more wrinkles appear on your forehead.  Where do you find a dried out lakebed?  In Wisconsin?  Well, Larry knows – he’s an engineer whose livelihood is studying the effects of floods.  So when it comes time to shoot that scene, Larry will be able to help us.  A small victory – and one I’ll cling to as I keep plodding forward.

One more thing: I stumbled upon this trailer today and it reminded me of why I love movies in the first place.

The Return of Rooster!

It may be a remake, but I CAN’T WAIT to see it!  All hail the Coen Brothers!

NEXT UP: Back in La-La Land.  Who knows what the smoggy bloggy will bring?

One Response to Meditations from the Midwest