My Subjective Thoughts on Subjectivity

I had three horses in the race.  I was feeling good, confident.  After four years of trying, I thought 2012 might finally be my year.  The Nicholl Fellowships in Screenwriting was established in 1986 through the Motion Picture Academy and it’s pretty much considered the brass ring of all screenwriting competitions.  Every year the organizers sift through thousands of unproduced scripts in the hopes of finding a handful of writers to whom they award a $35,000 fellowship, along with the expectation that the anointed fellows will write another screenplay during their fellowship year.  However, its rewards are not just financial.  Because the contest is so widely respected throughout the industry, it offers immediate exposure to the lucky winners.  Heck, it’s a badge of honor to even have a script place as a quarterfinalist in the contest.

So with three scripts in the running, scripts that have been pored over/rewritten/finessed-to-the-last-comma, scripts that have done well in other contests, surely at least one of them might squeak through among the almost 7, 200 screenplays entered and place in the quarterfinals?

Yeah, the problem with entering three scripts in a contest is that you set yourself up to be rejected three times.  And such was my Tuesday night. 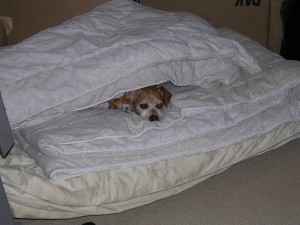 According to the “P.S.” notes at the bottom of Nicholl’s very well-crafted rejection letter, BENEATH THE SURFACE got two positive reads from those that judged it.  And BLACK SEA ROSE (co-written with my pal Jill Reilly) placed in the top 10% of all entries!  And yet HUNGRY LIKE THE WOLF, the script that received two positive reads from Nicholl last year and is a current quarterfinalist in the PAGE Screenwriting Awards and has generally been my strongest contest contender to date, didn’t even warrant a “P.S.” this year.  Hmmmmmmm…

I held a brief pity party and entertained the stream of lovely, supportive e-mails from friends and fellow writers reminding me of how SUBJECTIVE it all is.  And you know what?  They’re exactly right.  It is all so utterly and sometimes painfully subjective.

Now I’m not saying I can’t revisit these scripts and try to make them better and stronger; there really is no end to the finessing that can be done.  But I also have to keep getting my work out there – to contests, agents, production companies, etc. – and hope that they land on the desks of people who spark to them and gets excited about them and might be able to DO SOMETHING with them.

I know those people are out there.

And, hey, *I* am one of those people since I’m producing BENEATH THE SURFACE, right?

I’ll turn to Ray Bradbury for final inspiration as I plow onward: “Living at risk is jumping off the cliff and building your wings on the way down.”  I’m definitely doing some wing-building this year.

2 Responses to My Subjective Thoughts on Subjectivity