Yes, I’m off to a late start with my blogging duties of 2012 – and one of my New Year’s resolutions is to stay more current with these updates. <SIGH>  Perhaps the fried cheese curds of Wisconsin clog not only my arteries but my brainwaves because it was hard for me to concentrate on bloggy while I was home – yet not due to lack of new developments.  There was a lot of activity on both the family and Deliberate front.  I got to spend time with my handsome new nephew as well as meet with a number of engaging prospective investors (and people who can help lead me to prospective investors).  It was gratifying to talk with highly successful people who are also compassionate, decent individuals.  These are the kind of Executive Producers I want supporting Deliberate Productions.

And did I mention how handsome my new nephew is? 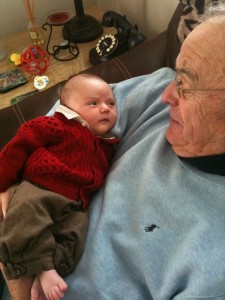 There’s been some forward movement on the script front, too.  Thanks to the boost from the Austin Film Festival, I have started entering my screenplays into various writing contests.  Some competitions offer cash prizes, others offer writing labs and mentorships, and a few offer both!  I believe I’ve already mentioned the website Without A Box, but it deserves another commendation (and link): https://www.withoutabox.com/.  The WAB database is a place where filmmakers and writers can upload their work for free and from which they can then submit it to various film festivals and competitions throughout the U.S. and world.  It serves as a convenient one-stop shop so you don’t have to keep filling out the same information on applications – and WAB let’s you know what’s out there.  Who knew there’s a Nantucket Film Festival that sponsors a month-long, all-expenses-paid Screenwriters Colony?  A month in Nantucket where all you’re expected to do is write?  Sign me up!

One of the contests I submitted to via Without A Box was the Vail Film Festival Screenplay Competition.  I was attracted to this festival because it’s going into its 9th year and it’s run by the Colorado Film Institute.  The fest also lures a fair amount of “industry” people (hey, those LA people can’t lay on a beach all of the time), so it offers some great networking possibilities for writer-producers like myself.   Anyway, I was honored to learn that my romantic comedy AUNT MOLLY’S MELTDOWN is one of fifteen semi-finalists in the screenplay competition.  I’m so grateful to be in the running and I’ll keep my fingers crossed that I may have an excuse to visit Vail at the end of March.  The finalists are announced next week, so I’ll keep you posted.

I also found out that my coming-of-age monster movie THE HUNT (which I’ve subsequently re-titled HUNGRY LIKE THE WOLF) is a semi-finalist in the Screenplay Festival competition, under the Horror/Thriller category.  I believe I learned about this contest thanks to Moviebytes.com (http://www.moviebytes.com/), another great resource for writers.  The Screenplay Festival is a contest sponsored by top production and management companies and it received good reviews from fellow writers on the Moviebytes message board.  I’m not sure when the winners get announced, but I promise to share the good, the bad, or the ugly results with you.

All I know is that the saying is true: it is an honor to be nominated!

Will DLB finally learn how to ski?

I admit to feeling weird about mentioning these current accomplishments, though – I’m proud of my writing, but wading in the self-congratulatory pool isn’t really my style…unless the collaboration is a shared group experience, like the shows I worked on at Disney and Nickelodeon.  Yet, self-promotion is one of the main reasons I was encouraged to jump on the social media bandwagon, right?  If I’m not getting the word out, who will?  And, believe me, the past year has been filled with plenty of rejection, snubs, and generally being ignored, which seems to be part of the deal when you’re forging any type of creative career.  So I guess these small, encouraging victories help me stay focused, motivated, and moving forward.

And it’s also good to know that my bloggy readers are there to keep me honest! (Please continue to do so.)